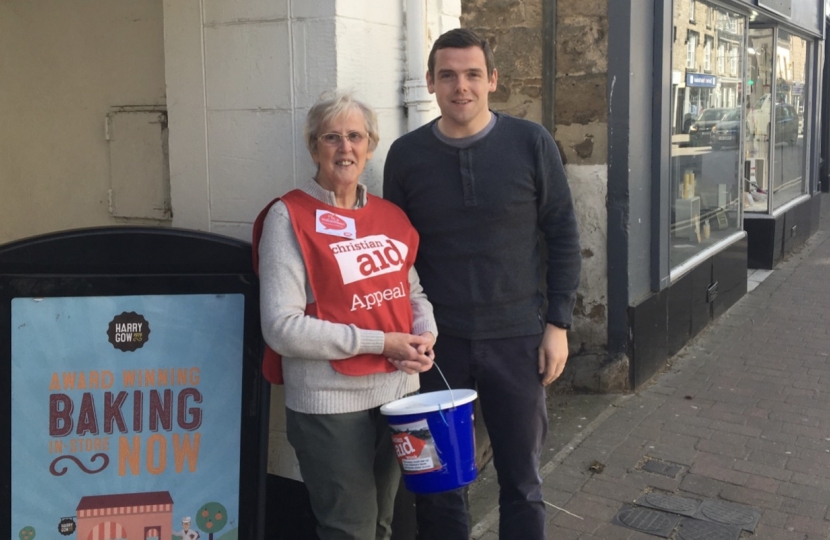 During Business Questions yesterday (Thursday) Moray MP, Douglas Ross, used the opportunity to recognise and congratulate the efforts of all the volunteers from across the country, particularly those in Moray, who are engaged in fundraising and community events to raise funds for Christian Aid Week. Commenting Douglas said:

“Thousands of volunteers across the country, particularly in Moray, are this week engaged in many fundraising events for Christian Aid Week. Last year local volunteers raised an amazing £18,079 in Moray alone which contributed to the overall fundraising effort of the country, which was £8million.

“This is a terrific community effort made possible by the generous donations of many and the hard work and willingness of volunteers to undertake collections or arrange community events, particularly lunches. It was great to pop in and see the team in Forres as well who were collecting on the street and hosting a lunch in the church hall.

“I’m pleased that the Leader of the House, Andrea Leadsom MP, was able to join me in paying tribute to all the volunteers up and down the country involved in Christian Aid Week and in particular she highlighted those volunteers in Moray who have championed this cause.”

In the House of Commons Andrea Leadsom said: “I am delighted to join Douglas in paying tribute to the fantastic volunteers up and down the country fundraising for Christian Aid Week, particularly in his constituency. Christian Aid was founded in the aftermath of the second world war, when it worked to support refugees and rebuild communities, and it is a great tribute to all those involved that their incredible work continues to this day.”