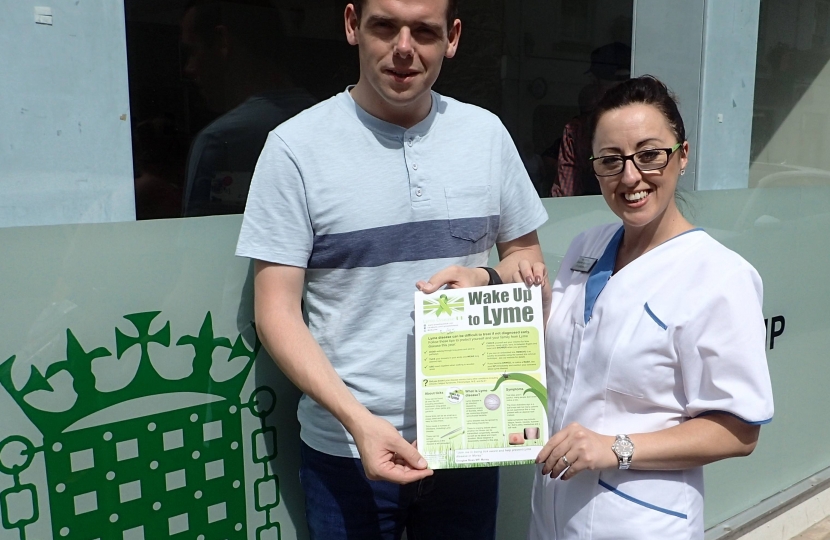 Moray MP Douglas Ross is highlighting the risk of Lyme disease which can be the result of a tick bite.  Last night (Sunday) the BBC Countryfile programme highlighted the dangers on Lyme disease and Douglas is joining the campaign to raise awareness of it.

Commenting Douglas said: “Lyme disease is caused by Borrelia and it’s the most common tick-borne disease which can have a serious effect on human health if it is not identified and treated.

“It’s really important that people check themselves for ticks as they can be easily be picked anywhere there is vegetation.  Despite treating our own dog for ticks he often has to get some removed which shows how easily they can then attach themselves to us.  I also know a number of people who have picked them up locally while gardening, for instance.”

Douglas’s call for vigilance was echoed by Bev Chapman, who works in a Forres pharmacy and whose son, Drew, aged 8, contracted Lyme Disease after being bitten by an infected tick when he was five. She said that it is important to make people aware.  Commenting Bev Chapman said: “We were totally unaware that Drew had been bitten, as there was no sign of a tick on him and he did not have the tell-tale bullseye mark which is associated with being bitten, but he had an unusual ring like rash on the sides of his torso and then a week later he had a torticollis stiff neck.”

“Doing daily tick checks on you and your family is paramount, remembering places like underarms, groins and behind the ears which can be easily forgotten.  That is why I am pleased to join Douglas in supporting this campaign.  By raising awareness we can hopefully prevent others suffering from Lyme Disease.

“The good thing about our story is it has a happy ending as we were able to get Drew treated quickly, but the repercussions from Lyme disease can be awful, so people should avoid getting bitten if at all possible.”

Douglas added: “Some ticks can be surprisingly tiny, about the size of a poppy seed, and can easily be missed. So it’s really worth checking very carefully. Sometimes you can get a slight sense of them on the skin causing mild inflammation so if you feel something like that do check it out and, if you find a tick, keep an eye on the bite and look out for the tell-tale signs of Lyme disease such as bruising or fatigue.

“There are a number of products on the market, which can be used to remove ticks from the skin and I agree with Bev that we need a continued effort to try and educate people to lessen the amount of cases we see each year.”

Douglas has also written to the Scottish Government to see what steps they are taking to tackle the disease. For more information on Lyme disease visit the website: www.lymediseaseuk.com