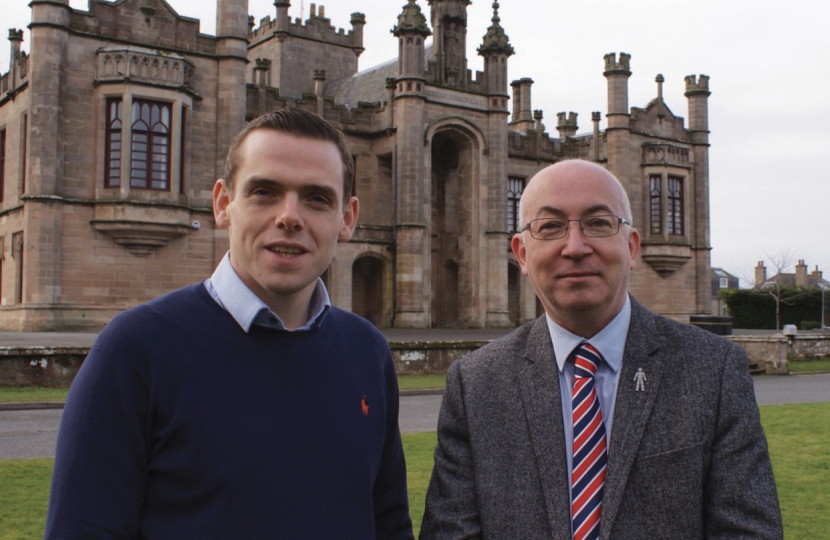 Moray MP Douglas Ross and Fochabers Lhanbryde Councillor Marc Macrae are seeking answers as to how a fire hydrant on the main road through Mosstodloch became inaccessible to local Scottish Fire and Rescue Service crews.

Last night (Monday) a fire broke out in a shed on the main road through Mosstodloch and firemen were unable to access the nearest fire hydrant as it had been covered by tar. Local residents who witnessed the fire claimed firemen had to locate another hydrant in a lane near houses behind the former village pub.

Douglas Ross Moray MP said, “While this fire was confined to an outbuilding, the fact fire crews experienced a delay in connecting to the mains supply raises significant questions and could have had far more serious consequences had it been an occupied building or home. The professionalism of the fire fighters on duty ensured the blaze was extinguished, but their efforts were undoubtably hampered because this hydrant was inaccessible.

“I’m working with the local ward councillor, Marc Macrae, and we are raising this issue with both Moray Council and the Fire Service as a matter of urgency. Not only do we need answers as to what happened with this hydrant in Mosstodloch, I want to know what is being done to check other hydrants that could be similarly affected.

“Quick access to water for fire appliances could mean the difference between life or death when responding to a callout which is why this matter is so troubling and needs addressed immediately.”

Cllr Macrae said, “Local residents who witnessed the fire contacted me almost immediately to let me know about the problems with the water supply.

“I was relieved when I was able to make contact with the homeowner and learn that both he and his wife were well and that their home was safe, although their shed was burnt to the ground.

“Clearly it is a great concern that fire crews found the hydrant access tarred over and had to go farther afield to obtain a connection.

“I immediately contacted the Head of Service at the council regarding this very serious matter and will be following this up to ensure that where works are done that access is always kept clear.

“Our emergency services do a fantastic job and would expect to be to access water supplies without hindrance.”