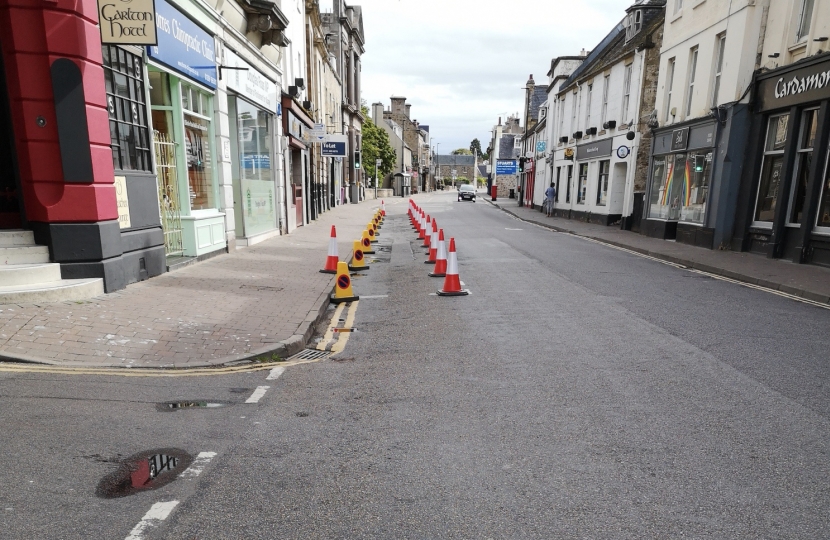 In an effort to allow social distancing for safer shopping in Moray towns, Moray Council set up temporary parking restrictions. The restrictions in Forres related to the six parking bays outside MacLean’s the Bakers on the High Street, where at the time of pre-restriction assessments there was seen to be queues forming outside. However, many individuals and local businesses queried the reasoning for blocking off the entire six bays.

Moray MP Douglas Ross said “To be fair to the Council they did what they thought best to allow safer shopping for all and sectioned off a six bay parking area to allow other pedestrians to pass any queues outside Maclean’s the Bakers on High Street safely. However, when you consider that there are actually no queues at any of the business premises directly beside this area, it seemed strange to block off six parking bays.  I contacted Moray Council highlighting this point and since then I’ve been in discussions with staff from the Roads and Transport Department and earlier this week two of the restricted bays were made available for parking again.

“As a result of ongoing discussions with the Council and after another site assessment, all the cones have now been removed.  This should help elderly shoppers or those who are disabled or infirm to park near the shops to do their shopping.  This will hopefully also be a boost to the local businesses who originally raised their concerns with me about the removal of all these parking bays.”

Moray MP Douglas Ross has urged Scottish Ministers to reconsider an “unfair” decision to exclude self-catering businesses from top-up grants made available to the rest of the hospitality sector.