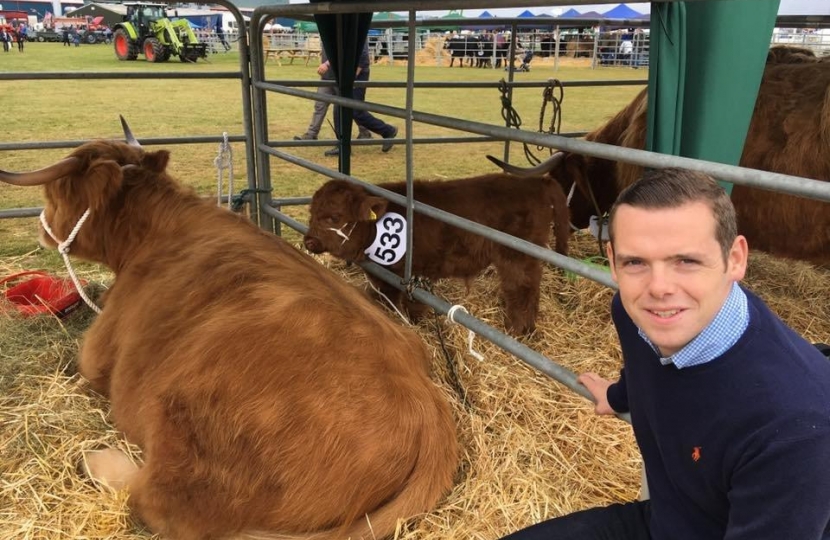 Moray MP Douglas Ross has welcomed the announcement from Chancellor of the Exchequer, Sajid Javid, confining that £160 million will go to Scotland’s farmers to resolve a historic issue and the Scottish Government will benefit from over £1.2 billion as a result of the UK governments announcement today.

The figures are contained in the Government’s spending round, which sets departmental budgets for the next year. They include significant increases in health and education spending in England.

As a result of these spending decisions, Scotland is set to receive £1.125bn in additional resource spending and £90m in extra capital spending. The Chancellor also announced an extra £160m for Scottish farmers to resolve an historic issue with CAP funding, following lobbying by Scottish Conservative MPs.

Under the last CAP reform, the UK qualified for what is called a convergence uplift because Scotland had a lower payment rate per hectare. However the UK Government at the time distributed this funding proportionally as it has done in the past. This extra £160m addresses this issue and comes after lobbying from Scottish Conservative MPs.

Douglas said: “During his leadership campaign, Boris Johnson promised that the £160m of EU agricultural convergence funding would go to Scottish farmers.  This is an issue I’ve  campaigned on since my election so I’m pleased the UK government have delivered on this.  The way the allocation was previously delivered was wrong, and that has now been corrected.

“The Chancellor’s move is extremely welcome and is the result of concerted pressure from Scotland’s Conservative MPs. The money will be given to the Scottish Government and I hope that they act swiftly to ensure that every penny is paid without delay to those farmers who the convergence scheme was originally designed to help.

“This spending review also gives the SNP Scottish Government a massive boost to their budget and I want to see Moray benefit from this cash injection.  We have seen local services slashed recently so I hope we can now see investment in Moray to protect the services local people value so much.”