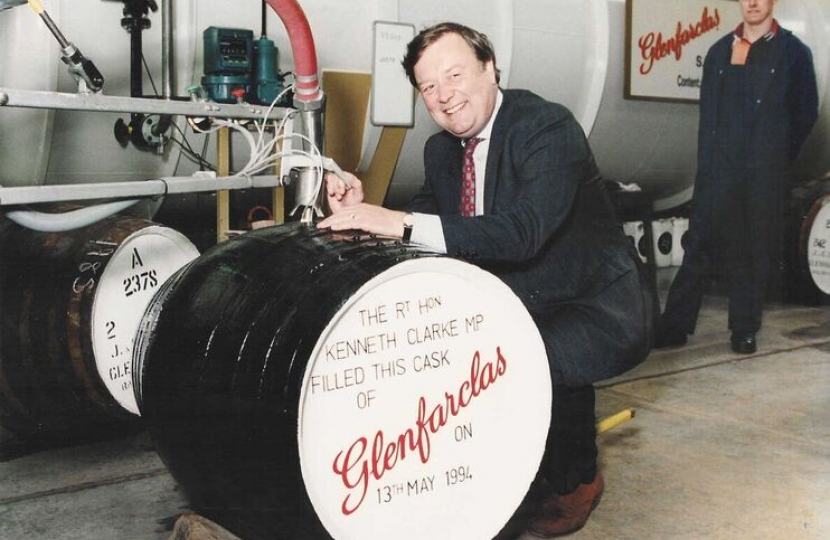 Moray MP Douglas Ross joined former Chancellor of the Exchequer and Father of the House of Commons Kenneth Clarke at Glenfarclas Distillery on Monday to open a very special cask of whisky.

Douglas said: “In 1994, when he was Chancellor of the Exchequer, Ken visited Glenfarclas Distillery where he filled and sealed a cask of whisky, declaring that it could only be opened when Moray next elected a Conservative MP.

“After my election in 2017, plans were put in place to open the cask and bottle the whisky on the 25th anniversary, so I was delighted to welcome Ken to Moray to do just that.

“It was great to have Ken back in Moray, exactly 25 years to the day since he filled the cask and it’s fair to say the whisky has matured really well.  The colour, smell and taste were excellent, and I’m sure it will be a popular dram when it’s bottled.

“As Chancellor of the Exchequer, Ken had a glass of Glenfarclas with him as he delivered his Budget speeches, soit was great to join him at the distillery and see him open the cask that he sealed 25 years ago.  I’m also grateful to John Grant and his family for keeping the whisky safe for so long and for hosting our a very memorable visit.”

“I was the first Chancellor in 100 years to cut the duty on whisky and while that wasn’t a direct result of my visit to Glenfarclas back in 1994, it is a distillery that I am very fond of.  I drank Glenfarclas at the dispatch box when I was delivering my budgets, so it was good to be back in Moray at the home of this special brand of whisky.

“This was one of the more special visits I’ve done as you don’t often return 25 years later to sample whisky you put into a cask so long ago.  I’m pleased it has matured so well and we have a very nice whisky from the cask after all of this time.”

Douglas added: “As Chancellor, Ken was always very supportive of the Scotch Whisky industry, and I have continued his lead since being elected to ensure that the freeze on duty was maintained.”