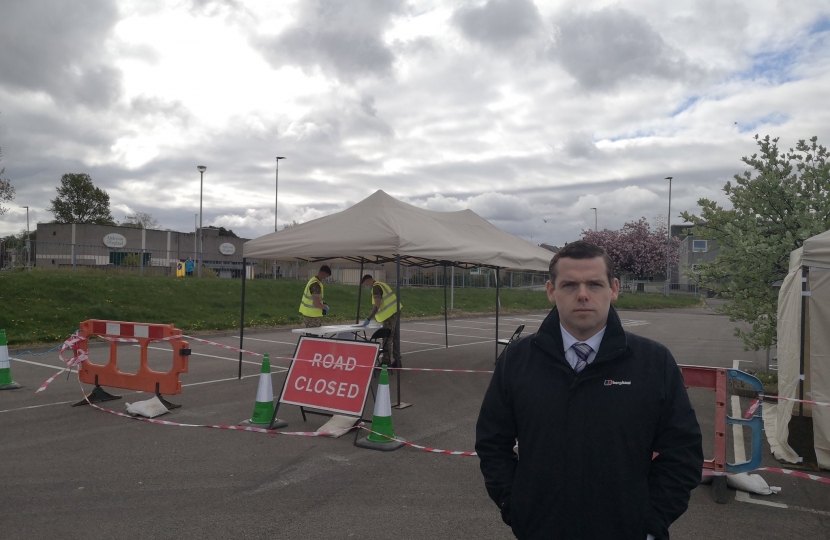 Moray MP Douglas Ross has welcomed a new mobile Coronavirus test centre which was put in place in a slick one-day operation by the Ministry of Defence working with Moray Council, and is now operational at a car park in Elgin.  The Moray MP is also a UK government minister in the Scotland Office who have been supporting the roll-out of these additional testing sites across the country.

Commenting Douglas said: “This test centre is one of 13 mobile units located at sites across Scotland which are funded by the UK Government.  Elgin is one of the first to open, with capacity to test up to 300 people per day.

“The mobile site located in the car park opposite Elgin Town Hall is being operated by Army personnel who are being mobilised across Scotland to support these efforts. It will offer testing to key workers who have symptoms, or members of their household and the military staff equipped with PPE will allow individuals to use the self-testing kits in their cars with results sent via text or email within three days.

“These sites demonstrate the UK Government’s commitment to ramp up testing around the country and are in addition to the drive through centres we have in the North of Scotland at Inverness and Aberdeen airports. The tests will hopefully provide reassurance to key workers who have symptoms and are an important step in the next phase of our fight against covid-19.”