Ross welcomes the arrival of Poseidon aircraft in Moray 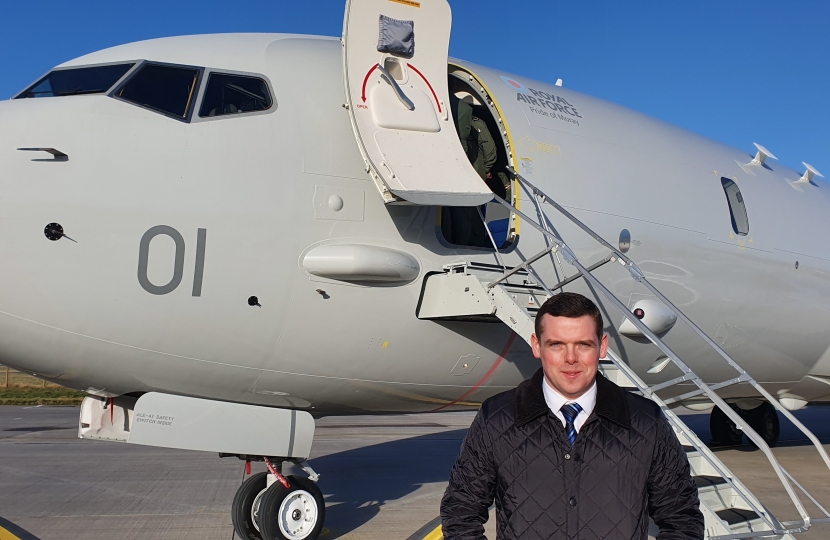 Moray MP Douglas Ross has commented after the first Poseidon (P8) maritime patrol aircraft landed in Moray.  Douglas was commenting after attending the ceremony which welcomed the aircraft to Kinloss where it will be based for several months before moving to RAF Lossiemouth.

Douglas said: “It was a real privilege to be at the official welcoming ceremony to witness the state-of-the art Poseidon aircraft touch down in Moray.

“The arrival of the P8s represents a key milestone in the massive investment programme by the UK government in Moray and Scotland with £400 million invested at RAF Lossiemouth and an overall investment of £3 billion worth of aircraft, providing ultra-sophisticated systems which will patrol and protect our shores around the UK as well as taking part in international and NATO operations.

“This is a massive boost to Moray, bringing jobs and investment to the area, as well as an influx of more than 500 personnel supporting the P8 squadrons who will be living and working here.

“We are delighted to welcome the P8s to Moray, and look forward to seeing the aircraft in the skies above our communities knowing the vital role Moray and Scotland is playing in the defence of the United Kingdom.”