Ross urges RBS to rethink its plans for Lossiemouth 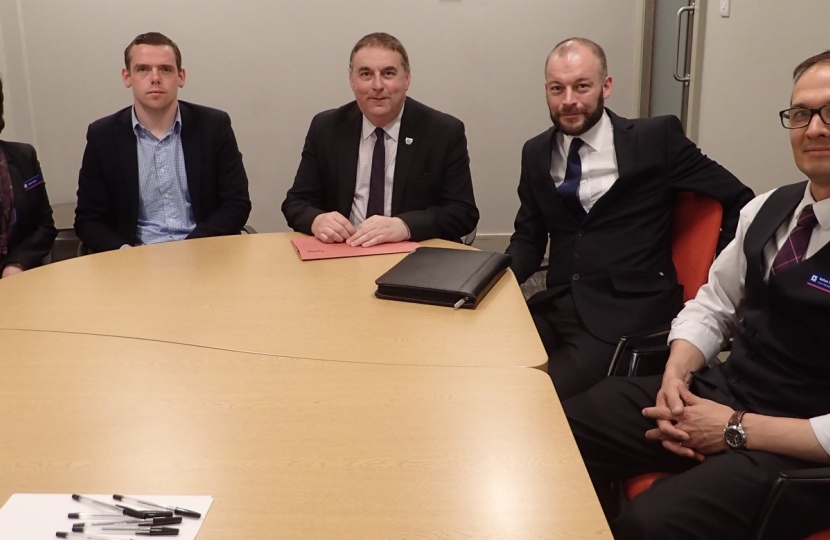 Douglas and Councillor Allan, the Convenor of Moray Council, met RBS regional director Martin Girvan and his colleagues Nathan Snyder and Anne Dewar to stress the impact reduced services were having on residents and businesses in Lossiemouth.

Douglas said: “I believe RBS’s decision to remove its ATM and reduce the number of times its mobile bank visits Lossiemouth to one day a week is short-sighted. The town is growing rapidly with new housing developments and we will see a major influx of service personnel and their families with the expansion of RAF Lossiemouth. It seems ironic that at the very time the UK Government is announcing an investment of millions into the local economy that the bank is reducing its presence even further.”

Cllr Allan said: “I really hope RBS will listen to what we are saying. People in Lossiemouth are finding it increasingly difficult to access cash due to the lack of ATMs and this is likely to grow worse as the number of ATMs reduce and the remaining ones can’t cope with the demand. For a town the size of Lossiemouth with a population of 7,000 and which attracts many visitors, such as the 5,000 who attend Seafest week, the banking facilities are simply inadequate.”

Mr Girvan promised that, in the light of the meeting, the points raised and evidence provided, RBS would review its decisions and report back to Douglas and Cllr Allan.