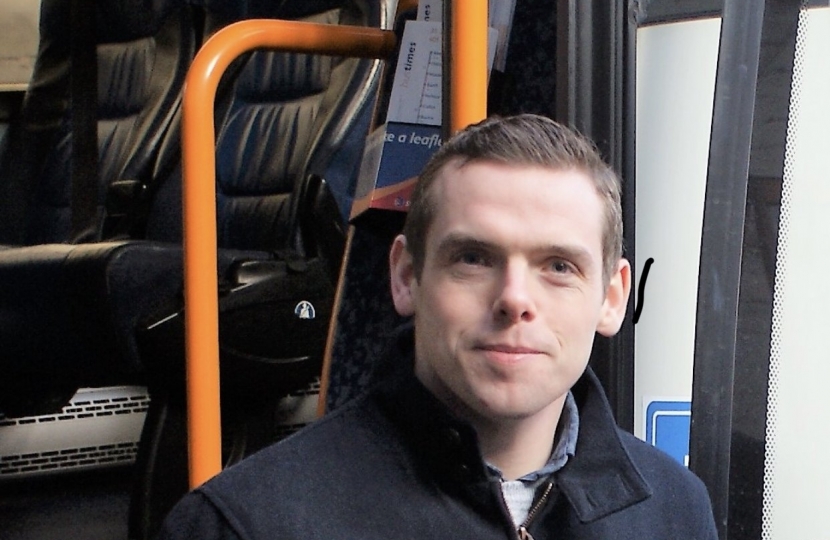 Moray Conservative MP Douglas Ross, said he is not giving up hope that Stagecoach can be convinced to reconsider their decision which led to the withdrawal of the bus service from Forbeshill in Forres to the town centre.

Last year, Douglas met with Stagecoach bosses in an effort to try and save some of the threatened bus routes in Moray.

Speaking today Douglas said: “Although I held discussions with Stagecoach last year on this issue, it is still one that features high on the agenda of a lot of people resident in the Forbeshill area of Forres. I am still being contacted by constituents about this, some of whom had given up their cars and moved to this area because of its easy access into town. Many people chose to stay in Forbeshill because of the good links it had to the town centre, with an hourly bus service and then onward travel to other destinations. However, Stagecoach withdrew the service because they said there was a lack of demand.

“If we are to encourage more people to utilise public services then we need to make sure they are responsive to the needs and demands of our communities. It is farcical when you consider our cities such as Edinburgh have buses, trams, trains and planes, yet here in Moray we cannot provide the proper connections within our towns. We have not even got straight forward connectivity with Inverness airport with the airport bus only coming east as far as Nairn.

“Following more local complaints being raised with me, I have again written to Stagecoach and Moray Council to try and reach a compromise on this particular issue. I’ve asked if they will consider even a less frequent bus service to this part of Forres, because let’s face it there is a minibus service which covers Kinloss and Findhorn and goes down to the Thornhill estate in Forres, passing the end of the road at Forbeshill. This bus could go to Forbeshill, even at less frequent intervals, and provide much needed access to the town centre for the many retired and less able people living there.

“I don’t entirely blame Stagecoach as they are not getting sufficient funding from Moray Council who are themselves being starved of resources by the Scottish Government. This at a time when the SNP Scottish Government are holding back half billion rather than using the money to fully fund our local services.”