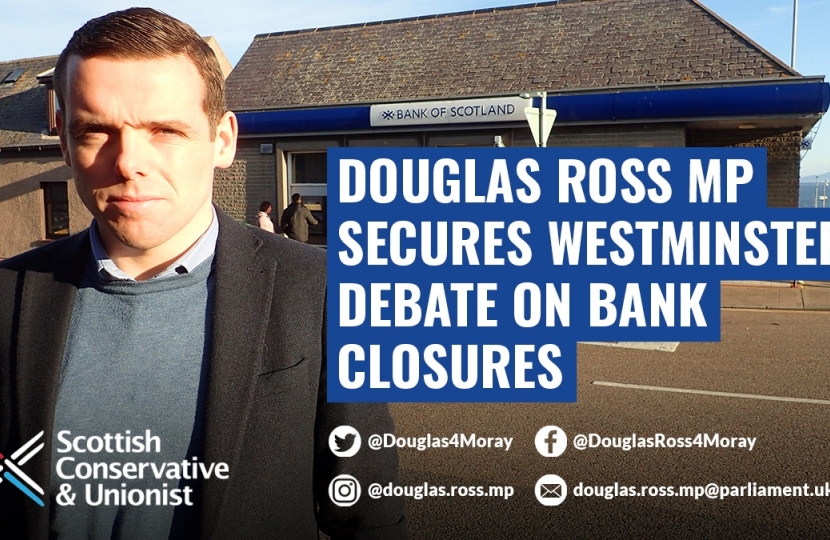 Moray Conservative MP, Douglas Ross has secured a debate in Westminster on Wednesday 12th June 2019, in relation to the bank closures after many branches across Moray closed their doors.

Speaking ahead of the debate Douglas said:

“When the Bank of Scotland announced last year that it was closing its branches in Lossiemouth and Keith I held public meetings in both towns. The strength of feeling was strong that we must try to keep as many local branches open as possible.

“While it has taken several months to secure this debate, I wanted the opportunity to challenge the government about their response, particularly if a closure will see the last bank in a town removed. This was the case of Lossiemouth which is a growing town because of the UK Government investment at the RAF base that will see an additional 400 personnel and their families arriving in the next few years. This expansion makes the decision of the banks all the more disappointing.

“Across Moray we have seen 16 bank branches close since 2015 and these closures have a detrimental effect on our towns right across Moray. It affects access to accounts and money for both business and private customers.

“Another massive implication of the closures is the removal of cash machines as well. At the weekend, following the closure of the Lossiemouth branch of the Bank of Scotland, there was no cash in any of the other remaining cash machines in the town.

“I’m holding the debate to urge the UK Government to do more. I am elected to challenge the Government on such matters and won’t just accept that there is nothing the Government can do.

“I’m really keen to look at Banking hubs in towns to see if this can be a workable solution. I also think the Government have to treat the final bank closing in a town differently from other bank closures.

“Mobile banking as a substitute is also not good enough. People in Moray deserve better yet here we have a situation where the banks deem it appropriate to close up shop and leave town. What kind of message is that giving to all those who live, work hard, or visit our iconic part of Scotland.”