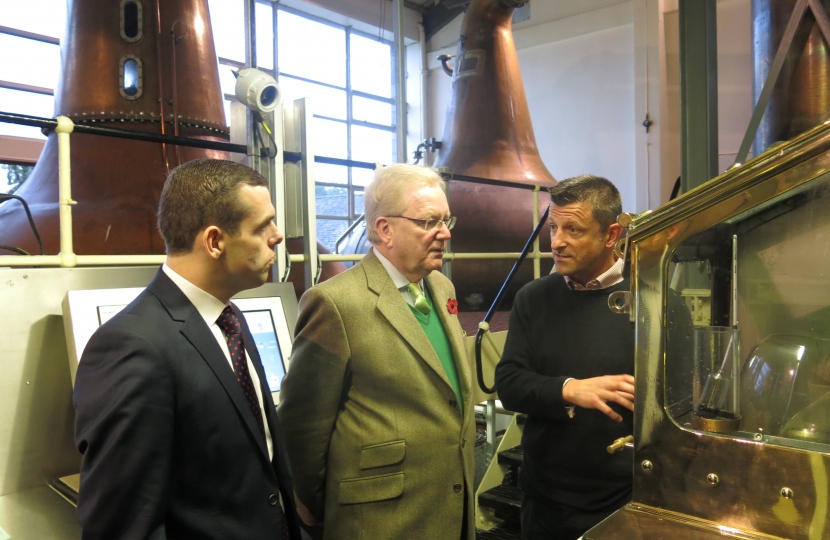 MORAY MP Douglas Ross used the first PMQs following the summer recess to question Prime Minister Boris Johnson about possible tariffs the USA may apply to Scotch Whisky and urged the government to do everything possible to stop them being applied.

Speaking after Prime Minister’s Questions, Douglas said: “Scotch Whisky is a vital industry for Moray and the whole country which continues to go from strength to strength. Last year, 41 bottles of whisky were shipped from Scotland every second, with an export value of £4.7 billion. That is a phenomenal contribution to our economy.

“But it could be under threat, along with many jobs, if the USA adds tariffs to Scotch Whisky in retaliation to the EU introducing tariffs on American products as part of their trade war.  It would be wrong for our iconic Scottish industry to be caught-up in this fight and I wanted the Prime Minister to know how important this is to Moray and the whole country and urged him to do everything possible to convince the US not to apply these tariffs.

“I’m pleased Boris Johnson has raised this with President Trump and I know it is being taken seriously at every level in Government.

“Supporting Scotch Whisky means the industry can continue to invest in communities across Moray and Scotland which is why I was determined to raise this with the Prime Minister at his first PMQ session.

The Scotch whisky industry is hugely important in Moray and potential tariffs applied by the US as part of their trade war with the EU could cost hundreds or thousands of jobs across Scotland and the UK. What representations has the Prime Minister made to President Trump on this matter? And will his Government do everything possible to avoid these tariffs being applied to the Scotch whisky Industry?

I congratulate my hon Friend on everything he has done to represent this vital industry which indeed earns billions of pounds in revenue for this country and I think that tariffs on Scotch Whisky would be absolutely absurd, a point we have made repeatedly to our friends in the US, but again, when we do free trade deals around the world. Whisky is one of those many products that will have its chances boosted in export markets where it is currently grown.