Ross continues call for action to improve A95 through Aberlour 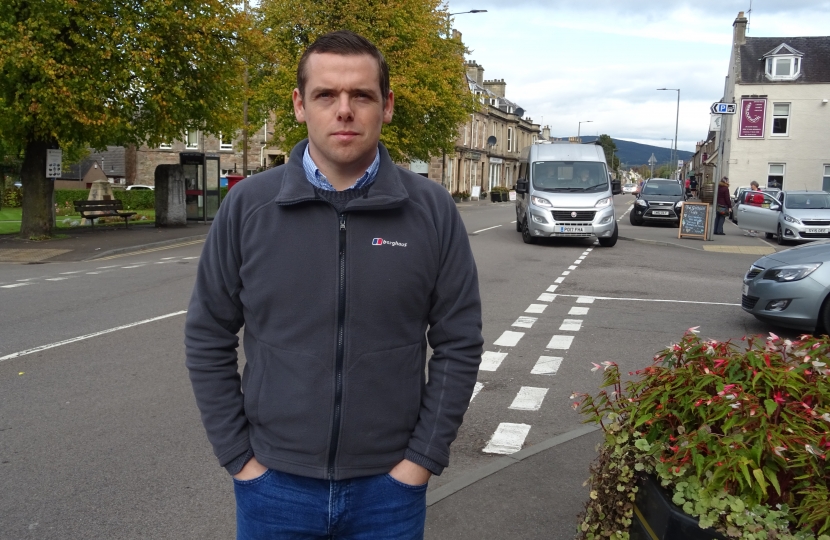 Moray MP Douglas Ross has called for BEAR Scotland to act swiftly when current restrictions are lifted to fix broken drain covers which continue to cause problems on the A95 through Aberlour.  The Moray MP has received a response from Transport Scotland after again raising the issue on behalf of concerned local residents.

Commenting Douglas said: “I have written to Transport Scotland several times about this matter after being contacted by people living in Aberlour and those who drive through it.  Everyone accepts there’s a problem and I’ve received reassurances on more than one occasion the issue would be addressed, but this hasn’t happened.  Given the current restrictions it could be some time before the repairs can be made, but I’m urging the authorities to treat Aberlour as a priority when works re-start.

“The loose drain covers on the carriageway through Aberlour have worsened significantly since I first raised the matter in October last year. As well as causing problems for lorries who can’t avoid them, every time they rattle over the damaged drain covers it causes disturbance to residents living nearby.

“Loose or broken drain covers are also dangerous for passing traffic and need to be fixed. When I highlighted this problem with Transport Scotland in October last year I was assured that agreement had been reached with Scottish Water to complete the works and they would be carried out by the end of January.  That didn’t happen and this missed opportunity has left the issue unresolved.

“This is causing concern for local people in Aberlour as the condition of several drain covers through the village have deteriorated and I’m told one could collapse altogether.

“As well as the obvious danger to motorists, these damaged drain covers are also extremely noisy when car and lorries drive over one of them.  It’s an unacceptable situation that has dragged on for too long and needs to be resolved urgently.”