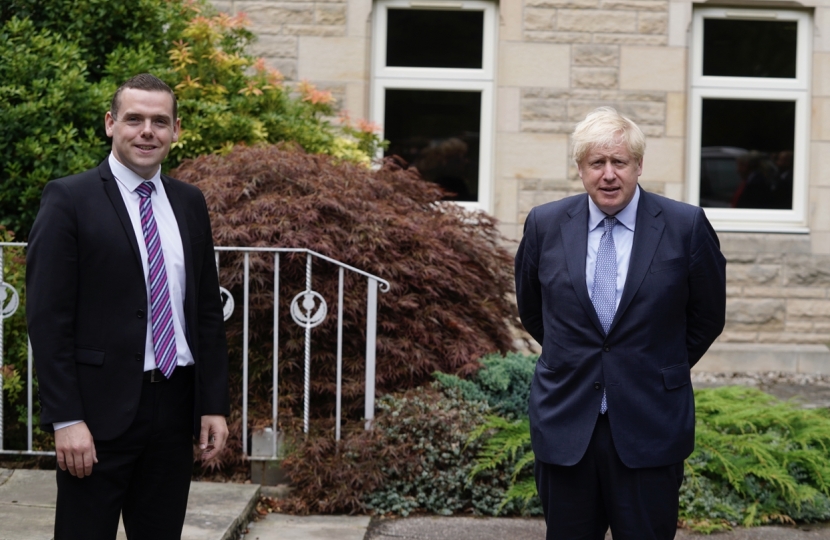 Moray MP Douglas Ross has commented afterwelcoming Prime Minister Boris Johnson back to Moray just months after his last visit. The Prime Minister met military personnel at Kinloss Barracks and RAF Lossiemouth as well as touring global firm Baxters at their base by the River Spey near Fochabers. Commenting Douglas said:

“It was great to have the Prime Minister back in Moray so soon after his last visit.  He was here just eight months ago, yet you have to go back to 2018 to find the last time Nicola Sturgeon came here in her capacity as First Minister.  While the Prime Minister doesn’t confine himself to the central belt of Scotland, it would be good if Nicola Sturgeon didn’t either.

“The military at both Kinloss and Lossiemouth have played a key role during the Covid pandemic while also continuing with their regular duties and I know they were grateful to hear directly from the Prime Minister thanking for everything they have done.

“Baxters is a global brand with a proud Moray history and it was good to see the developments at the factory and discuss the work they’ve done in recent months, meeting the increased demand for many of their products.  Naturally, they also sell across the UK which is why our government’s plans to protect the internal market is so important for them and many Moray businesses and their staff.  While the SNP are opposing this for political reasons the Prime Minister is determined to ensure Scottish jobs and businesses are not hurt by the SNP’s damaging stance on this issue.

“Having the Prime Minister back in Moray allows us to highlight what the UK government is doing right here in the local area and I look forward to his next visit as the UK government continues to invest in Moray and support all four nations of the United Kingdom.”

“It was great to be back in Moray supporting the military at Kinloss and Lossiemouth and thanking them for the incredible work they’ve been doing to help people right across the UK during the Covid pandemic. The UK government has invested heavily in RAF Lossiemouth with millions of pounds of investment and hundreds of new jobs coming to the area.  This is just one example of the strength of the United Kingdom benefiting Moray and the local economy.”