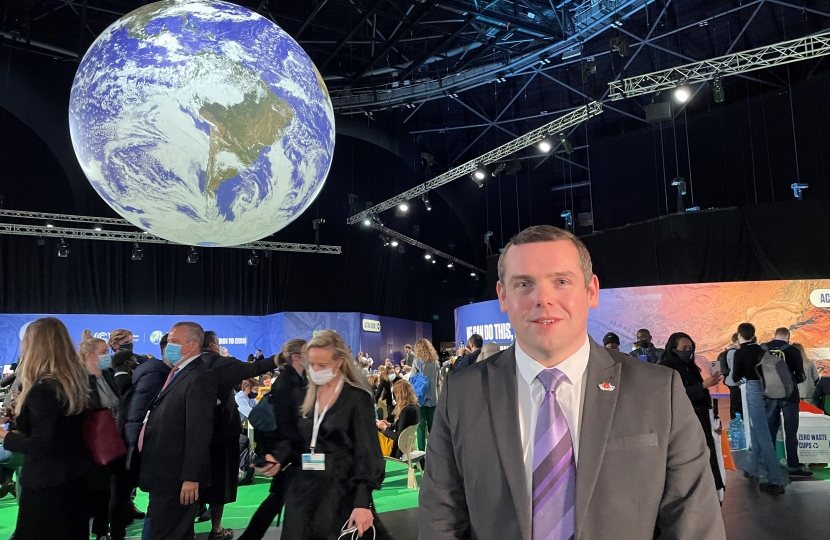 Moray MP Douglas Ross joined delegates from more than 190 nations accross the world when he attended the COP26 climate conference in Glasgow earlier this week.

Commenting Douglas said: "It was great to be at the largest ever conference held in the UK which, with almost 40,000 delegates, also ranks as the biggest COP gathering in history.

"Glasgow hosting this conference was as a result of a strong bid by the UK Government, and the debates and outcomes from it will be crucial in tackling climate change and accelerating action towards the goals of the Paris Agreement and the UN Framework Convention on Climate Change.

"It was fascinating to be in the Blue Zone at COP 26, where climate experts, campaigners, policy makers and world leaders were debating how to make global progress on limiting the rise in world temperatures in order to protect the future of our planet.

"This has been labelled as the last real chance to tackle this emergency and it was good to be there as Moray’s MP as issues with the environment and climate change are often raised with me by local constituents.”

Having learned that the TSB plan to close their branch on Forres High Street, Forres, Moray MP Douglas Ross and his colleague Councillor Claire Feaver have commented about what this closure will mean for local residents and businesses.