MP gets behind the scenes tour at Silver Sands Holiday park 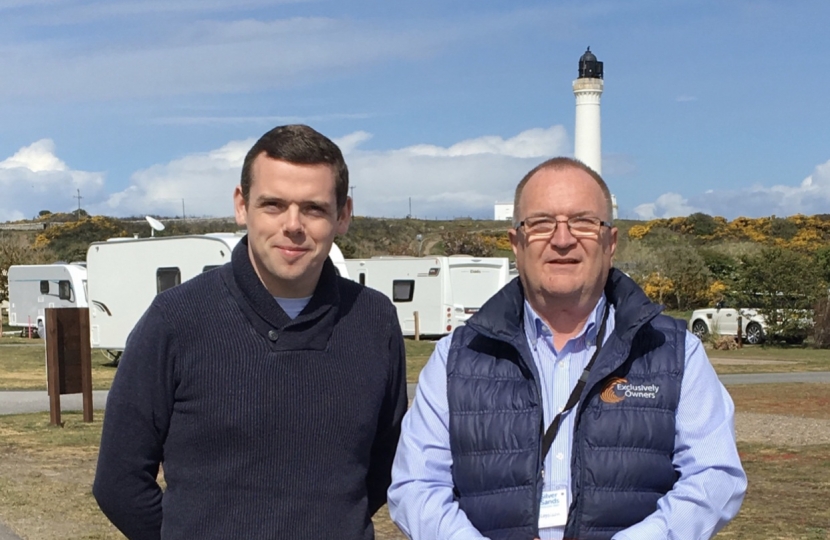 MP Douglas Ross was given an access all areas tour at Silver Sands Holiday Park today (10th May).

On the tour he was shown where the additional investment in the park for 2019 is being spent, which includes new pet friendly accommodation, upgrades to its electric and water hook up points for touring guests as well as developing further locations for holiday home ownership.

The visit was organised as part of Scottish Tourism Month to celebrate the enormous contribution of our tourism industry to Scotland’s economy which saw over 166 million visitors in 2017 generating over £11.3 billion. Mr Ross’s visit was postponed earlier this year due to votes in Parliament.

Silver Sands General Manager, Michael Clappison said: “Obviously tourism is important to the park, but it is also really important to the local community and economy here. We employ people from the local area providing much needed jobs and we bring visitors to the area.

“We are very grateful that Douglas was able to visit the park today and see all the hard work that goes into preparing the park for the busy summer season ahead.”

Douglas said: “I’ve passed Silver Sands Holiday Park many times but I didn’t realise from the road the extensive area it covers and the huge number of sites available for static caravans and tourers.

“It was good to see the improvements made to the site in recent months and to hear about their additional plans for the future. It’s very clear that this is a significant local business employing many people at the site and investing in its future which is very positive for the local economy in Lossiemouth and the surrounding areas.”