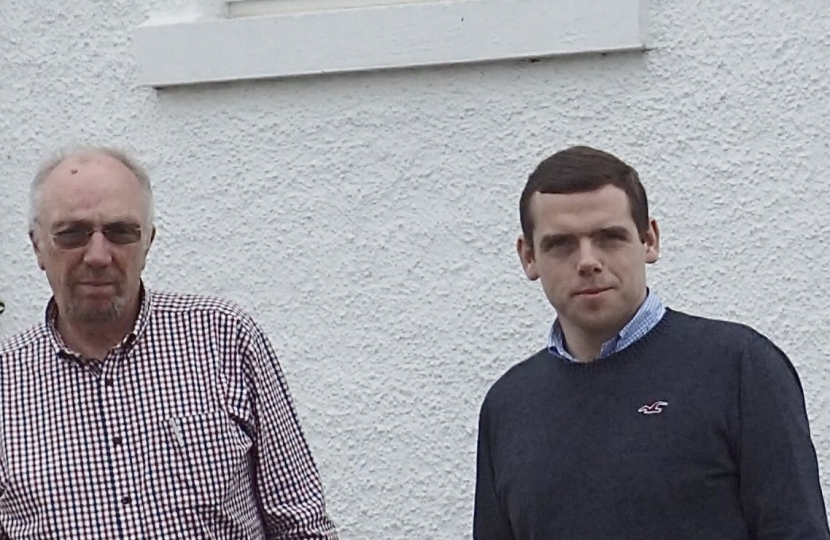 MORAY MP Douglas Ross and local Conservative Councillor Frank Brown have commented after Moray Council and Scottish Water said that cleaning out drains would probably not have prevented the flash flooding in Elgin last week which resulted in roads and streets being awash following torrential rainfall. Douglas had written asking what was being done to alleviate the misery of flooding for residents in Elgin where street drains were overcome.

Commenting Douglas said: “Following calls from residents, I contacted the council and Scottish Water to ask them to look into this urgently. I have received responses which state that the infrastructure isn’t equipped to cope with such unprecedented levels of rainfall, such as the deluge we have witnessed in recent days.

“Streets in the Victoria Road area were impassable following a short burst of torrential rain again on Monday moght when the road drains couldn’t cope and backed up. Problems in Maisondieu Road and the Seafield Crescent area also resulted in a number of calls as drains were inundated there, which then compounded the problems for residents in the nearby Victoria Road where this extra water ended up. We’ve also seen problems with surface water elsewhere in Moray over the past fortnight causing problems for pedestrians and drivers.

“Residents want to know if drains can be cleared to at least allow as much rain water as possible to escape and help keep the streets from flooding. This is a problem that has been ongoing for some time and people want to see some action before properties are inundated.

“Although the council are responsible for road gullies and their connection to sewers, this responsibility passes to Scottish Water in urban areas and both bodies state that the problem in Elgin is down to infrastructure and the amount of rainfall. They state that recent flooding was not directly due to blocked road gullies or sewers but as a result of the unprecedented rainfall with sewers running at capacity; in some locations the force of the water was throwing up the drain covers.

“The council have admitted that due to budget constraints they have moved to a risk-based approach for gully cleaning which could cause problems in the future. I’m urging both Moray Council and Scottish Water to do everything possible to minimise this type of flooding going forward, it’s the least residents and local businesses deserve.

Moray Conservative Councillor for Elgin Frank Brown has also been in touch with the council’s road department to try and find resolution to this ongoing problem. He said: “We as a council are in a very difficult position, with regards to provision of services, but given the gravity of this flooding and the mitigating circumstances surrounding the heavy rainfall, I have asked again what can be done to help these constituents. This situation has been ongoing for years and happens every time there is prolonged or torrential rainfall. A solution needs to be found.”

Douglas added: “We really need a way forward. If the local authority is struggling to meet the needs of residents in Moray due to budget constraints, then the council leader should be speaking to the Scottish Government to access extra funding for this vital work.”