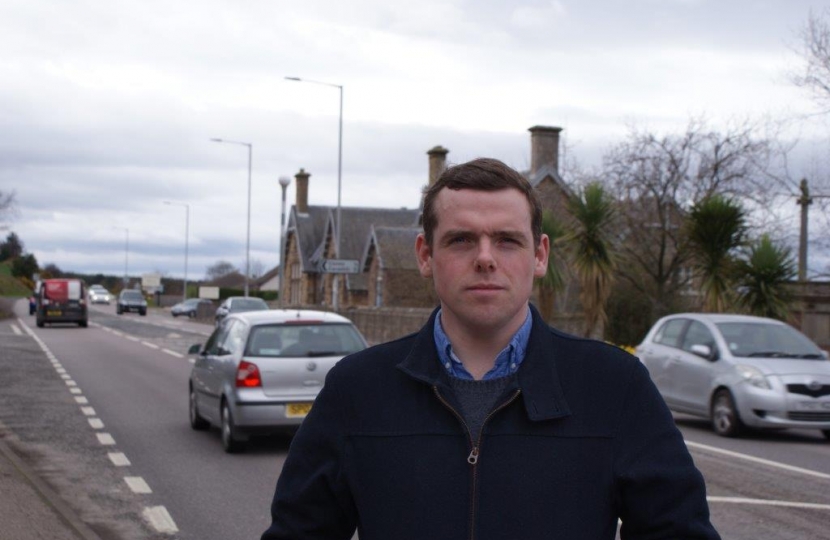 Douglas Ross, MP for Moray, has today been named Road Safety Parliamentarian of the month for July by Brake, the road safety charity, and Direct Line Group. The award recognises Mr Ross’ efforts to improve young driver safety in Scotland, advocating for a Graduated Driving Licence (GDL) system to be piloted across the country.

Young drivers in Scotland are over-represented in crash statistics and are a high risk on the roads, and Mr Ross is committed to tackling this. The approach Mr Ross is calling for would involve restrictions on young drivers carrying passengers under a certain age, restrictions on driving late at night and a minimum learning period followed by a post-test probationary period.

Mr Ross has worked with experts on young driver safety, including Dr Sarah Jones of NHS Wales, who has carried out 10 years of study into road collisions in Scotland, and the Transport Research Laboratory to research the life-saving potential of a Graduated Driver Licencing (GDL) system being introduced in Scotland. It is estimated that GDL could prevent almost 200 casualties, including 29 people being killed or serious injured from collisions involving a 17-19 year old driver, per year in Scotland alone.

Road safety charity, Brake, has long called for a Graduated Driver Licencing system to be introduced UK wide. They believe that such a system is the only way to ensure that new drivers have the necessary skills and experience to drive safely on the roads and so tackle the disproportionate number of young people involved in road crashes.

Douglas Ross MP said: “I am honoured to accept this award from Brake in recognition of the work I have carried out with regards to improving road safety. One life lost on our roads is one too many and with the Highlands and North East Scotland having the highest proportion of young driver deaths in the UK, it’s time to look at more proactive action. This is why I’ve proposed a form of Graduated Driving Licence to be piloted in Scotland.

“All the evidence from across the world, where such schemes have been introduced, convinces me that this is the way we need to go. In doing so I also pay tribute to the work of other Politicians in Scotland from across the party divide who have also championed this cause.

“It would be remiss of me not to mention the supportive work of Dr Sarah Jones of NHS Wales who has carried out 10 years of study into road collisions in Scotland and Dr Neale Kinnear and Dr Shaun Helman both of the Transport Research Laboratory who provided me with all the analytical data required to pursue this initiative.

“It’s early days yet, but I’m hopeful that by working together we can make a positive difference to road safety.”

Commenting, Joshua Harris, director of campaigns for Brake, said: “It is a great privilege to honour Douglas with this month’s road safety award. Far too many young people are being killed or seriously injured on our roads and Douglas should be commended for taking the initiative to change this in Scotland.

“We know that a Graduated Driver Licencing system is proven to work, and whilst we welcome the UK Government’s announcement last week that they will explore this issue further, swift and decisive action must be taken to introduce GDL in Scotland, and across the wider UK, as a priority to end the tragedy of young people dying on our roads.”

Gus Park, Managing Director of Motor, Pricing and Underwriting at Direct Line Group, said: “We would like to thank Douglas Ross for advocating for a Graduated Driving Licence system to be piloted among young drivers across the UK. This group of drivers are one of the most vulnerable on our roads, and any measures that increase their driving experience including minimum learning periods and post-test probationary periods are welcomed.”