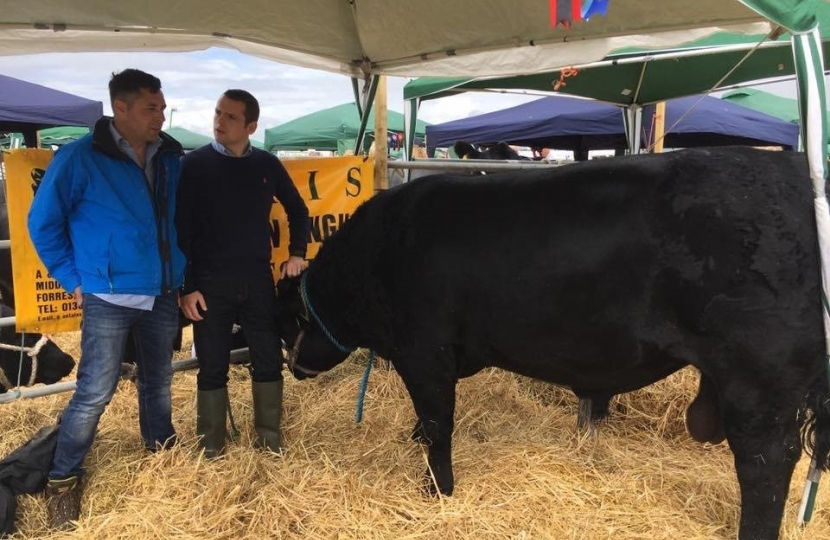 Moray MP Douglas Ross has welcomed an announcement made today (Monday 30th December) by the UK Government confirming that millions of pounds of support for Scottish farmers has been guaranteed ahead of 2020.

Next year’s cash injection will replace funding under the Common Agricultural Policy (CAP) as Britain leaves the EU. This will supplement the remaining EU funding farmers will receive, allowing Direct Payments for 2020 to continue at the same level as 2019, enabling farmers to plan for next year.

Commenting Douglas said ““Farming is vital to Moray’s economy and this announcement shows we are backing our farmers as we promised we would in our manifesto at the General Election. The £473 million UK Government support for Scottish farmers for 2020 is on top of the recently announced boost of over £211m, £160 million of which will resolve the issue of historic convergence allocations.

“For too long our farmers have been given a poor deal by the Common Agricultural Policy and we will make sure they have a prosperous future outside of the EU. When we get Brexit done we will tailor support better to Scotland’s unique farming environments.

“Having worked in farming in Moray prior to my election, and having studied agriculture at college, I know how important it is for our local farmers to plan for the year ahead which is why the government were keen to get this guarantee about next year’s funding out so quickly following the election.  I will continue to work with local farmers and stakeholders as we leave the EU to ensure they have a bright and prosperous future as we take decisions that are best for farmers here in Moray and across the United Kingdom.”

“When we leave the EU-run Common Agricultural Policy, we will be able to more effectively support our rural communities – who are a such a cornerstone of life in the UK.

“Farmers can enter the New Year with confidence that they will be able to plan for their crops, livestock and land, and deliver their world-class food and drink.”