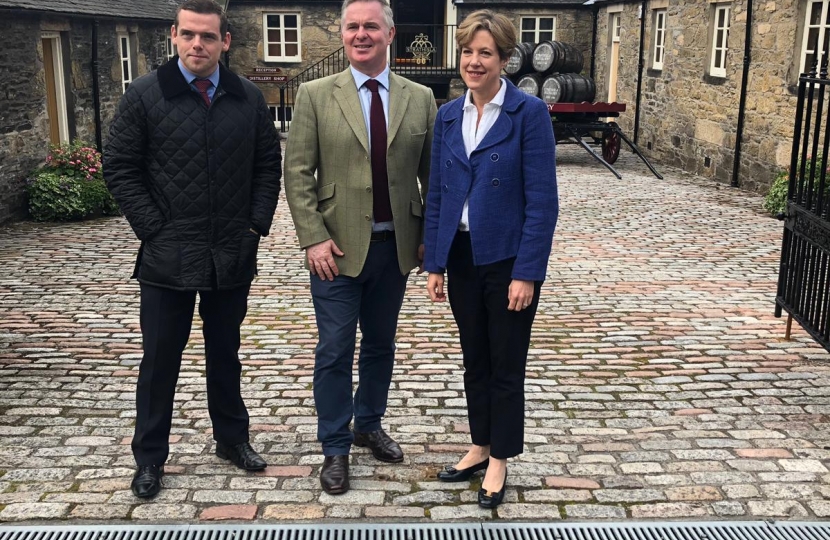 “It was good to welcome the new Scotland Office Minister on his first visit to Moray at the Strathisla Distillery.

“We discussed a range of crucial issues for the Scotch Whisky industry which is so vitally important here in Moray.

“Scotch Whisky continues to go from strength to strength and the important role it plays in communities across Moray cannot be understated.

“The particular challenges faced by the sector at present include the threat of retaliatory tariffs from the USA in response to EU aircraft subsidies.

“It was clear from Colin Clark how important this matter is for the UK Government and I know all departments at Westminster are aware of the issue and will work to avoid this at all costs.

“Strathisla Distillery is a great example of what many in the industry are doing to reinvest in their site and its clear what a positive difference has been made at the distillery further enhancing the visitor experience for both local people and tourists from around the world.”

“In my new role as UK Government Minister for Scotland, this week I have had the chance to visit some key industry players in the North East; From Angus Soft Fruits in Arbroath, to the James Hutton Institute in Dundee, and the Strathisla Distillery in Keith. I met these great local businesses to hear first-hand their needs as we get ready to leave the EU on 31 October, and discuss what we can do to boost their businesses after Brexit.

“On Friday, I saw the journey of our most famous product, Scotch whisky, from the grain harvested by our farmers to the finished dram. Last year, 41 bottles of it were shipped from Scotland every second, with an export value of £4.7 billion.

“The UK Government recognises the importance of the North East’s farming and food industries, and we will protect and support them.

“For years, British farmers have been given a poor deal by the EU’s Common Agricultural Policy, which is why we want to replace it with a fairer system of support after Brexit. As the Prime Minister has said, once we are out of the EU, we will have a historic opportunity to introduce new schemes to support farmers – and we will make sure that Scottish farmers get a better deal.

“We know that we need to protect the provenance and heritage of whisky and other iconic Scottish products. That is why we will be launching our own geographical indication scheme at the point at which EU rules cease to apply.

“Our amazing producers in the North East will be boosted as new markets are opened up. Once we are free to negotiate trade deals across the world, we will be able to capture the growing thirst for Scotch in countries like India, Singapore and Taiwan.”