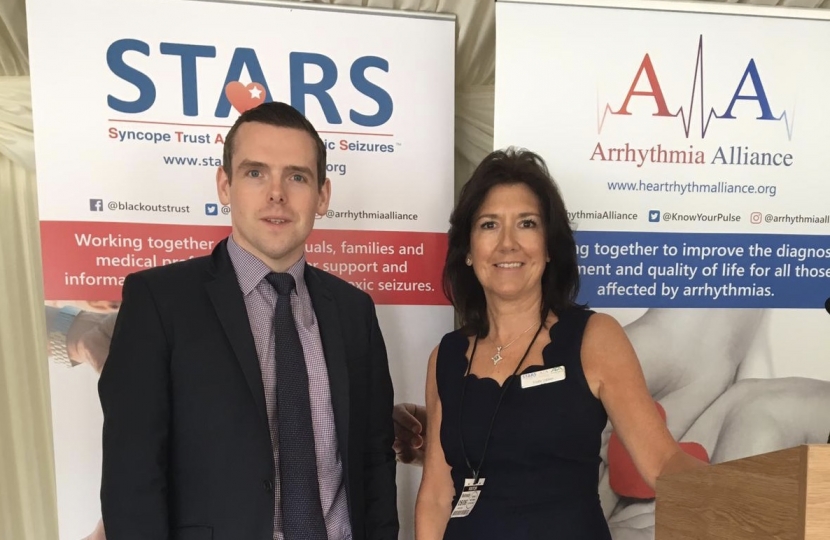 MORAY MP Douglas Ross is asking people in Moray not to miss a beat by showing support for World Heart Rhythm Week which runs between June 3rd and 9th to raise awareness of those who suffer from seizures and arrhythmia. While the official campaign concludes on the 9th June the message will continue to be highlighted.

Douglas said: “I attended a Parliamentary reception at Westminster with the STARS charity who do so much great work.

“I became involved with them after meeting Jane Bateson, an outstanding local campaigner from Forres, who attended one of my surgeries after I was elected. Jane works tirelessly to raise awareness of STARS and the Arrhythmia Alliance who work together to support people who suffer with seizures and autonomic disfunction.

“Jane is a great ambassador for these charities and was awarded Volunteer of the Year for her amazing fundraising for the charity who helped her when she was diagnosed with dysautonomia.

“She has raised more than £3000 from selling donated books from a shelf on the Coop store on Forres High Street. Jane also raises awareness by handing out leaflets about seizures and arrythmia and tells me that people often share their own stories and are grateful for the additional advice and support. .

“We are fortunate in Moray to have someone like Jane at hand to keep us updated about the charity’s campaigns and I would encourage everyone to support World Heart Rhythm Week.”

Local campaigner Jane Bateson added: “It’s been great having Douglas’s support for the charity and I’m grateful for the interest he has shown in helping me raise awareness. Scottish patients need as much help as they can get as it is a minefield getting to see the right consultants with a condition like this and for me, getting the right diagnosis for autonomic dysfunction was very difficult.

“There are currently no specialists in Scotland so having Douglas’s support and his keen interest means that we can raise more awareness to hopefully, try and make this happen. I’m grateful to STARS and the Arrhythmia Alliance for everything they do.”