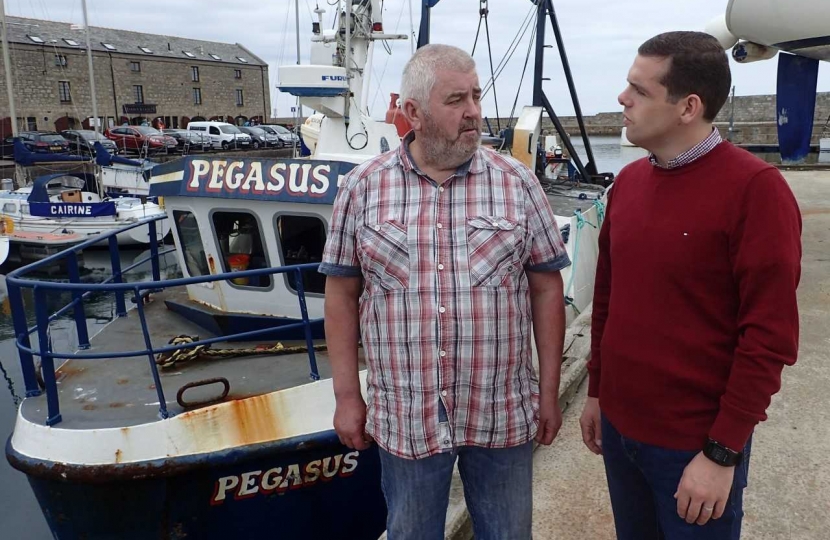 Moray MP Douglas Ross has challenged the UK Government about difficulties faced by inshore fishermen who rely on migrant workers to enable them to crew their boats. He also highlighted the fact that fishing is not considered to be a skilled profession, something he said had to change going forward.

Douglas made his comments during a debate he secured in Parliament on the labour shortage being experienced by the fishing industry as a result of current visa regulations. The rules prohibit non-skilled workers from outside of the EEA from working on the inshore fishing fleet, as they are not considered ‘skilled workers’.

Commenting Douglas said: “This is a very important issue and it was brought home to me when I met earlier this year with local fishermen: Douglas Scott from Lossiemouth and Neil Sutherland, from Burghead, who explained how important it is that this issue be resolved.

“Mr Scott for instance had not been able to fish in recent months due to illness and because he had no crew, was not able to put his boat to sea and therefore had no income. He has been relying on Filipino workers, but due to the government regulations he has not been able to recruit anyone. I spoke to him on Friday shortly before he left to fish for squid off Shetland, a day to get there, and then straight back out to fish. It is very hard work which he is doing on his own just now and all he wants is one additional crew member but current restrictions means this can’t be someone from outside the EEA.  I think it’s important that even as a member of the governing party we are not silenced to toe the party line.  There is an issue that needs to be resolved and I am happy to add my support and voice to this cause.

“I also pointed out during the debate that fishing is in fact a very skilled profession and should be recognised as such. I wrote to the Chief Executive of UK Visas and invited her to come to Moray and spend a day with Douglas on his boat, this was declined.

“It seems ludicrous to me that while local fishermen cannot get young people to crew their boats that they should face such problems getting crew, and even more so that a migrant worker can work if he fishes outside of the 12-mile limit, but not in it.”

Leading the debate, Mr Ross called on the Government to re-introduce a concession to the rules, that would allow non-EEA nationals to work on inshore vessels. A similar concession operated between 2010 and 2012, allowing a limited number of visas to be issued to non-EEA fishermen.

“I have listened to the very genuine concern proposed by Douglas Ross, it is made in a constructive manner and I will be taking forward his ideas to the Immigration Minister and indeed into the policy of the Home Office.”

Douglas added: “I was pleased that the Home Office appeared to take onboard many of my concerns, and those of the fishing industry, during the debate.

“While I completely recognise that more needs to be done to boost the domestic labour pool, the industry must have access to workers from overseas if it is to prosper in the short-term. A concession to the current rules, as has worked successfully in the past, would be a welcome first step.

“I hope that the Home Office now explores the options it can take quickly, as our fishing industry is crying out for Government support in this area. We know that solutions are available, and I will continue to press the case with Ministers until these are implemented.”