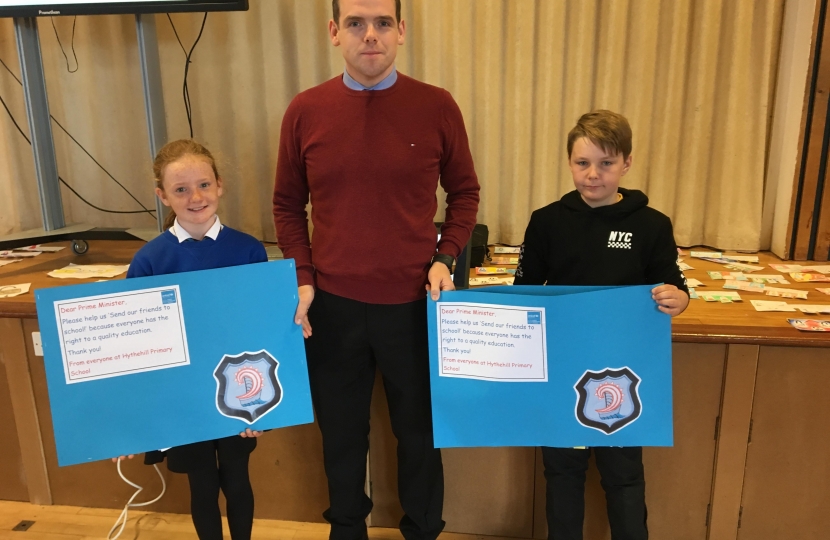 During Business Questions in the House of Commons today (Thursday) Moray MP, Douglas Ross, used the opportunity to recognise and congratulate the efforts of all the pupils of Hythehill Primary School, who have been involved in the ‘Send my friend to school’ campaign

They and the rest of the school taking part, were well supported by Deputy Headteacher Rachael Blackhall.

“The pupils designed and created brilliant messages in support of this campaign which I have now delivered to 10 Downing Street as the pupils wanted.

“I’m pleased the Leader of the House joined me in paying tribute to all the pupils of Hythehill Primary who were involved in this campaign and in particular to Jack Mackenzie, Chloe Thompson and Deputy Headteacher Rachael Blackhall.

“The ‘Send my friend to school’ campaign calls on world leaders to prioritise education and make sure all children globally get the chance to go to school.  That is why I was so pleased to visit Hythehill Primary School to hear more about this programme and deliver their message to Downing Street as well as having the opportunity to highlight the excellent work done by the school when I raised this in the House of Commons.”

In the House of Commons, Leader of the House Mel Stride said “Can I thank Douglas for raising this very important campaign and school initiative which raises globally the importance of education and I congratulate Jack, Chole and Rachael Blackhall for what they have done.

Moray MP Douglas Ross has today tendered his resignation from his post as Under Secretary of State for Scotland in the UK Government.