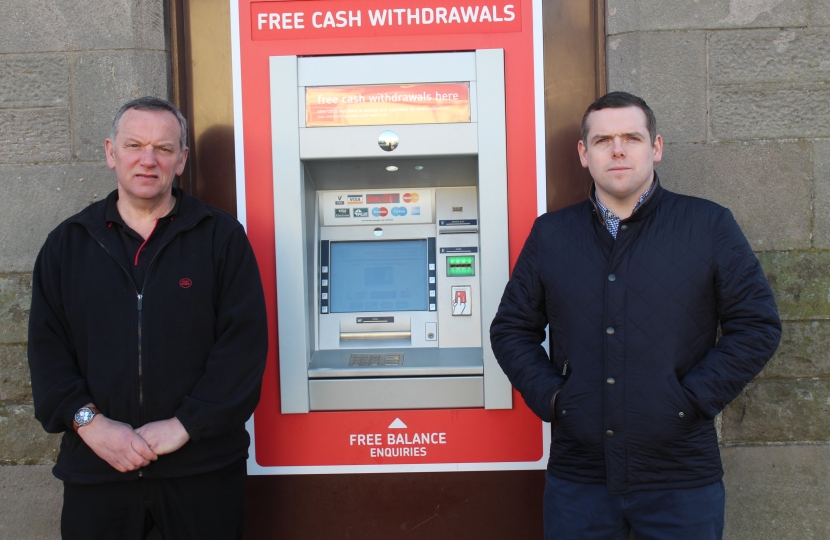 Moray MP, Douglas Ross has raised his concerns with the Post Office after learning that they plan to close their ATM situated outside the main Post Office in Forres.  Later this year the Western end of the High Street will see the closure of the TSB branch and their ATM so Mr Ross is urging the Post Office to reconsider their plans and keep the ATM at the Post Office.

Commenting Douglas said “The Post Office have said they plan to remove their ATM situated outside the main Post Office in Forres next month, but I’m urging them to reconsider.

“This is yet another nail in the coffin of our community access to banking facilities and cash and I hope they will listen to local concerns and keep the ATM in place.

“In November the TSB bank announced that they were closing their branch on Forres High Street and advised customers to make full use of the services located at Forres Post Office, including the cash machine.  We could now see both of the ATMs at the West of Forres removed which will clearly have an impact on local people and businesses.

“I have written in the strongest possible terms to the Post Office, making them aware of the TSB closure just a few hundred metres from the Post Office and I’ve asked them to reconsider this decision.”

Postmaster and shop proprietor Paul McBain added “This decision by the Post Office is very short sighted. I take pride in the fact that I am able to provide a wide choice of services to the public here in Forres and having an ATM that was accessible 24/7 was part of that service. With the TSB closing down, they advised their current customers and others to make full use the services my team and I provide here at the Post Office. Now the Post Office have said they want to close down this ready access to cash, I just wonder where it is going to end.”

Moray MP Douglas Ross has welcomed the arrival of the ninth new P-8A Poseidon aircraft (ZP809) which flew into RAF Lossiemouth this morning.

Commenting Douglas said: “This ninth aircraft completes the maritime patrol fleet at RAF Lossiemouth and is a fantastic way to start 2022.