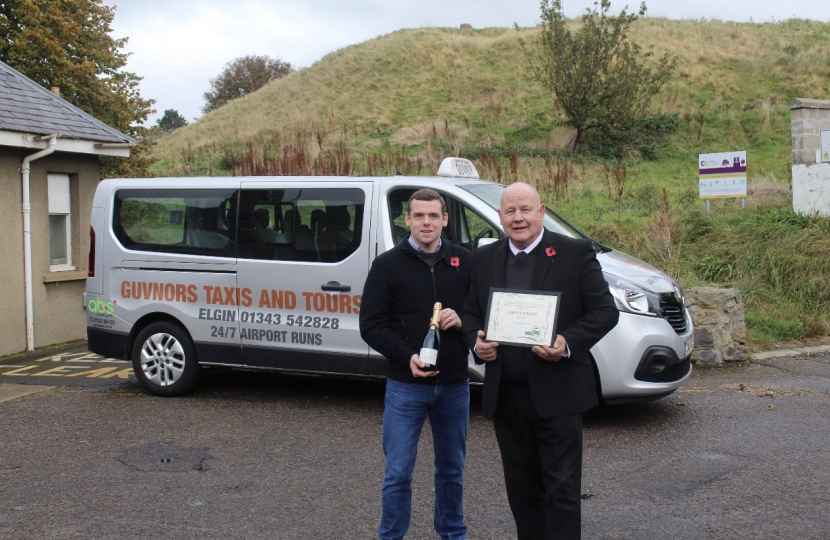 MORAY MP Douglas Ross has presented an Elgin taxi driver with a national award after Garey Stewart was named runner up in the inaugural Parliamentary Taxi and Private Hire Award. All 650 MPs from across the country were invited to nominate a local taxi driver and when the results were announced. Garey Stewart had beaten off competition from all parts of the UK to be named runner-up.

Commenting, Douglas said: “I was delighted to be able to present this national award to Garey Stewart from Guvnor Taxis in Elgin, who always goes the extra mile for his customers.

“I nominated Garey because he has gone above and beyond to assist local people in Moray including driving a woman in labour to hospital in Aberdeen to give birth, as she had no other way of getting there. Guvnor also recently took a number of senior citizens on an outing for a day, as he was concerned they were lonely and would become socially isolated, so wanted to give them an enjoyable day out.

“These are just two examples of the extra lengths Garey goes to for his customers. His passion for what he does and for our area shines though which is why I was delighted to nominate him.

“It was just a coincidence that the date we arranged to present Garey with his certificate was exactly thirteen years to the day since he started Guvnors Taxi, but it was also quite fitting that this anniversary of starting his business was marked by receiving this award.”

The awards were introduced to Parliament by Labour MPDaniel Zeichner who added: “I congratulate Garey on his Runner Up prize in the inaugural Parliamentary Taxi and Private Hire awards – he should be very proud of the contribution he has made to both the trade and his community.”