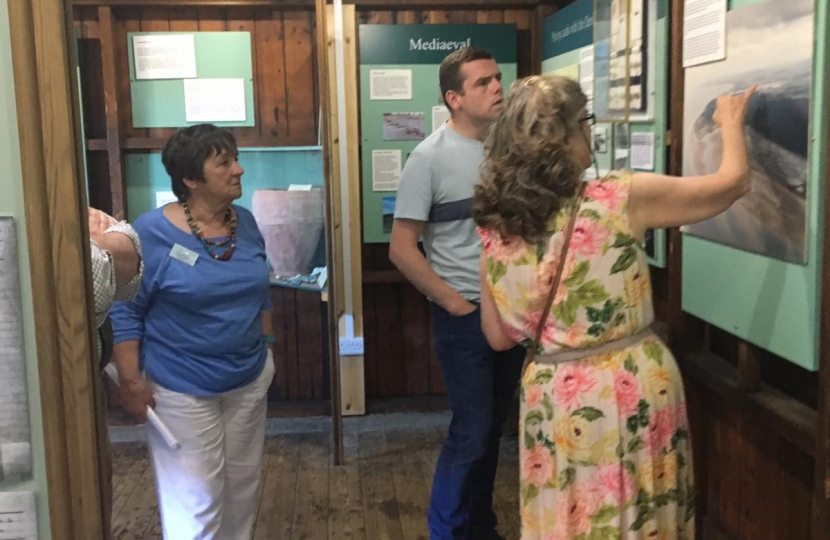 MORAY MP Douglas Ross was given a fascinating look at how villagers on a stretch of the Moray coastline used to live and work during a visit to the Findhorn Heritage Centre and Icehouse recently.

Commenting Douglas said: “It was really interesting to visit the heritage centre to find out about the work that volunteers are doing there. I was really impressed by the exhibits, the knowledge of the volunteers, and the volume of information and historical items that are packed into the centre, which is well worth a visit.

“The fact that the fishing industry in Findhorn was such an important part of village life is something worth celebrating and commemorating.

“People in the area are right to be proud of their heritage and it is testament to those who have contributed items to form displays and old pictures, as well as the volunteers that these stories can continue to be heard and shared.

“This is also a very good educational resource and I was pleased to hear that the centre hosts many groups of children, as displays fit in with a number of items on the school curriculum.

“The volunteers at the centre do great work and have an amazing amount of material on display, as well as being hugely knowledgeable themselves. All in all, this makes for an outstanding visitor attraction that I would recommend to local people and visitors to the area.”

Secretary of Findhorn Village Heritage Elaine Burnssaid: “We were very pleased to welcome our local MP and to introduce him to the committee and volunteers and show him around.

“Volunteer, Campbell Ross acted as guide and explained the role of the Icehouse in the local salmon industry and Douglas listened to one of the audio stories of local man Bill Fraser whose reminiscences gave a glimpse into salmon bothy life.

“In the Heritage Centre Douglas met local bird expert Richard who had just finished his update of the bird board and further explored the history of Findhorn through displays and exhibits in the second shed. He also watched a short film dating from 1930s showing coastal salmon fishing in action.”

Elaine added: “A home bake and a chat with the other volunteers in the courtyard was enjoyed by everyone at the end of the visit.”