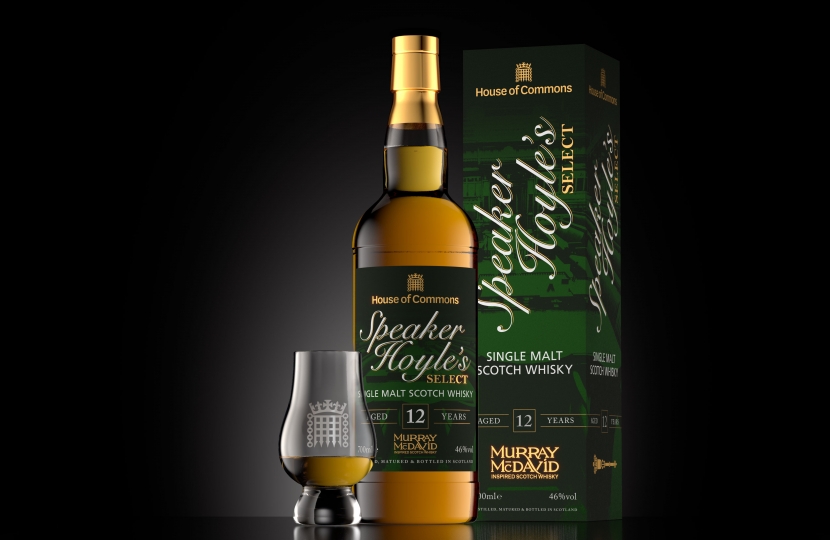 Moray MP Douglas Ross has praised the Speaker of the House of Commons, Sir Lindsay Hoyle, for his choice of the Glen Moray single malt as the official Speaker’s Whisky. The ‘Speaker Hoyle’s Select’ will be sold in the gift shop at the House of Commons. The specially labelled Parliamentary bottle is usually popular with MPs, staff and tourists and often chosen by them to gift for charities to auction. The Speyside single malt was picked for its sweet, rich, fruity freshness, following a blind tasting of six whiskies from four distilleries across the UK.

Commenting, Douglas said: “I’m delighted the Speaker has recognised Moray in this way and would like to congratulate him for his good taste and excellent choice.  He follows a long line of Speakers who have looked to Moray for their whisky of choice and cements our undoubted status as the home of Scotch whisky.

“I take every opportunity in the House of Commons to remind fellow MPs of the importance of Scotch whisky and how many distilleries we have on our doorstep here in Moray.  I’m sure the Speaker’s choice will be a tremendous boost for the Glen Moray distillery.

“I would also like to congratulate everyone at the Glen Moray for their hard work producing this excellent single malt and being recognised in this way.

“The proof of the pudding is in the tasting they say and I have extended an open invitation for the Speaker to come to Moray and visit the distillery in Elgin and enjoy a wee dram in the land where the amber nectar is made! I know he won’t be disappointed.”

“Speaker of the House of Commons Sir Lindsay Hoyle said: “I am very proud to be keeping alive the spirit of Speakers past and present with this traditionally matured whisky. It’s a great talking point for the work that we do – and I am sure it will be snapped up as a present or souvenir by eager tourists, MPs and politicos."

During the financial year 2019/20 Moray Council took the decision to dispense with the role of School Crossing Patrollers as they provided a non-statutory service. This decision by Moray Council was taken to help address a budget deficit.