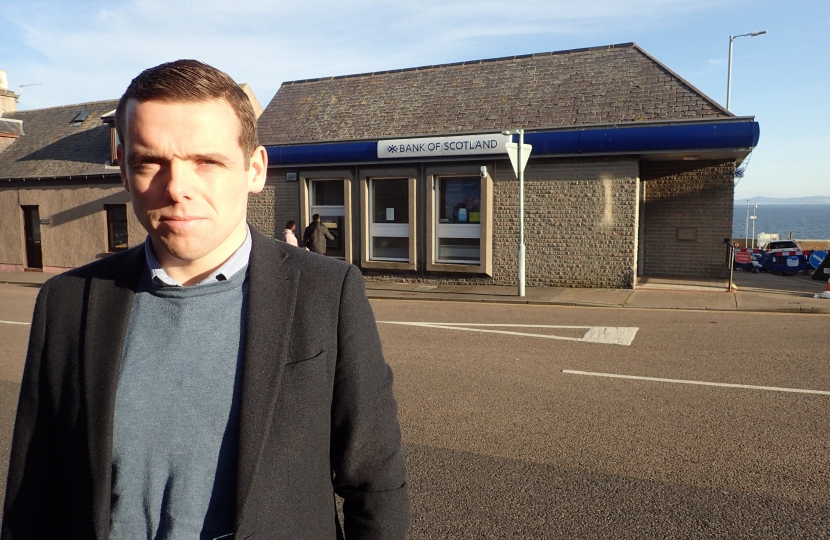 MORAY MP Douglas Ross says banks must do more to avoid closing branches and leaving their customers high and dry without a banking service, which in some areas has also seen them without any access to cash as was the case in Lossiemouth at the weekend.

Speaking at a debate he secured in Westminster on Wednesday to consider the Government response to the issue, Douglas said: “Bank closures are an issue of growing concern and increasing frustration to people in Moray, across Scotland and the rest of the UK.

“In Moray, there have been 16 closures since 2016 affecting every part of the area while in Scotland there are 130 communities which are classed as being cash deserts meaning they have no access to either a bank branch or an ATM.

“Banks say they have their reasons including falling footfall and more people using online banking, but people continue to need banks for face to face interaction and if they listened to their customers the banks would know this. For many banks their engagement and so-called consultation processes are deeply flawed and arguably a waste of time. They say they will consult but it is a fait accomplis. They know what they intend to do from the start and have no desire to listen or engage properly. In most cases, it is just a paper exercise before closing a branch.

“I’ve held two public meetings in Moray about this and on both occasions, communities and local representatives outlined the needs for local branches to be retained.  But the banks wouldn’t engage and didn’t seem to care. It is shocking and unacceptable behaviour.”

“Not everyone has access to good broadband or a decent mobile signal, to be able to use online banking, particularly in a rural community, and not everyone, particularly elderly or vulnerable customers want to bank in this way. People want a face to face service.

“The loss of these facilities can be deeply damaging to local economies and to small businesses as well.  Tourism will also suffer as a result of these closures as often smaller shops, takeaways and taxi firms don’t accept card payment. For them, these closures are devastating.

“On paper, banks are supposed to go through procedures and protocols and certain processes, before closing a branch, but in experience these are worthless as they ignore what local people and businesses say.”

“Some communities are lucky if they get the mobile bank for one hour a week but there are a number of services that cannot be provided and it does not offer a real alternative to a branch. There is no privacy for customers, and in bad weather, people may have to stand outside waiting for someone else to finish their business before they can go inside.

Strongly criticising the banks for not taking forward the idea of a banking hub, Douglas added:

“This has been dismissed out of hand but we need to make progress and we need a banking standard in place to prevent banks from so easily writing off communities and the idea of a hub.

“Banks could even improve their image by listening and working with communities rather than just leaving them and we as a Government need to do something to ensure they do that by introducing a robust banking standard.

“I was encouraged that the Minister took in board all the points made by members across the House. The government will now look to secure more meaningful consultations before a decision is taken; he is going to meet the Lending Standards Board to pass on concerns about the access to banking standards as they are clearly not working.

“ I was pleased that he will also use some of our examples from Moray and the poor service we receive to convince the banks and others to change their attitude towards local communities.”

John Glen MP Executive Secretary to the Treasury said he was grateful to Douglas for bringing the issues to the table.

The Minister said: “I’d like to begin by thanking Douglas for securing this important debate and I’ve listened carefully to all the contributions made.

“I recognise this is an important issue to many of our constituents and I understand how difficult this is for communities. We have heard specific examples of the distress that can be caused when that process doesn’t go smoothly. I recognise there are different opinions about how that challenge shall be met.

“The case Douglas raised about cash machines in Lossiemouth running out of cash this weekend is deeply concerning and alarming.  I want to use this as an example to present to banks and the industry as we seek a solution to the issues highlighted is this important debate.”