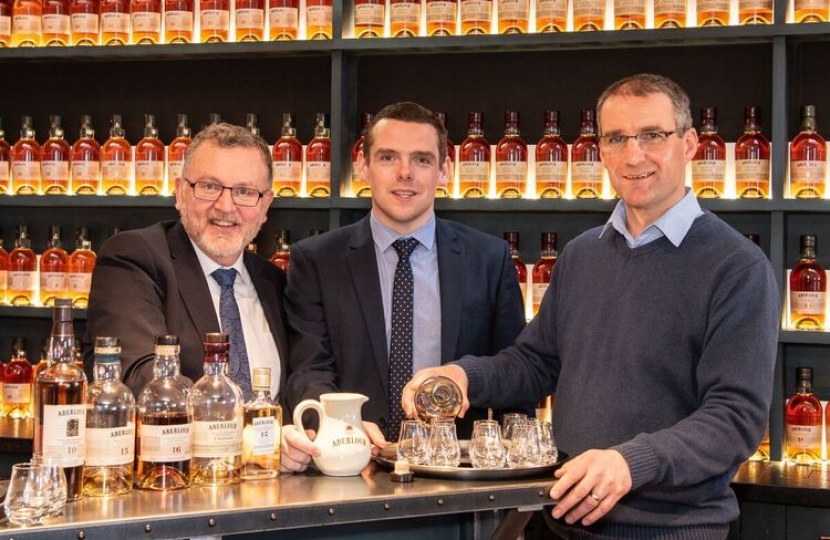 During Scotland Office Questions yesterday (Wednesday) Moray MP, Douglas Ross, used the opportunity to highlight a recent report that showed the contribution of the Scotch Whisky industry to the UK economy had grown by 10% since 2016 to £5.5 billion.  He also backed calls from the industry for a fairer taxation system for Scotch.  Commenting Douglas said:

“It’s clear from a recent report that the Scotch Whisky industry continues to go from strength to strength and as Moray is home to the highest number of whisky distilleries this is great news for the area.  Since I was elected as MP for Moray I have worked hard to ensure the freeze on duty was maintained.  While we have been successful in these efforts, I agree that we need to take a more long-term look at the way Scotch is taxed.

“I’m pleased the Scottish Secretary agreed that the government will look at alternative taxation proposals and I will work with the Scotch Whisky Association to bring forward these plans.

“We have seen the positive result of previous freezes in duty which has allowed the industry to invest more than £500m in production, distribution, marketing and tourism over the last five years.  That tells me if we continue to support this iconic Scottish product, the industry will continue to invest in communities across Moray and Scotland which is something we can all support.”

“Douglas represents the constituency in the UK with the most Scotch Whisky distilleries and is a very powerful advocate for the industry and we will look at any proposals they care to bring forward in regard to duty on whisky.”

“The duty freeze over the last two years has not only been warmly welcomed by the industry, but hugely beneficial to the economy through the revenue generated to help fund vital public services.

“But there is more to be done, and we welcome the Secretary of State’s commitment to look at our proposals for fairer taxation. £3 in every £4 spent on the average priced bottle of Scotch in the UK is currently collected in tax and the industry will continue to campaign for fairer treatment of Scotland’s national drink.”