Douglas Ross votes with the SNP in Westminster debate on WASPI 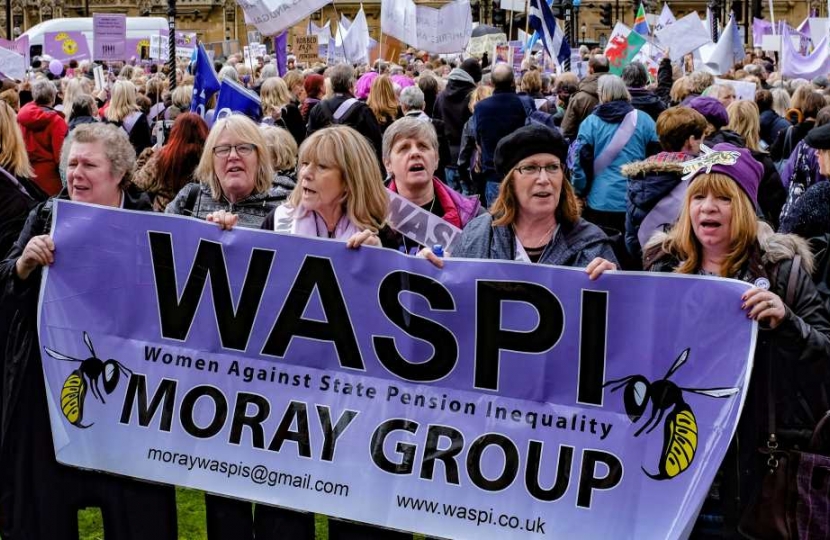 WOMEN BATTLING FOR a fair deal over pension changes were celebrating a small victory last night when the Government were defeated in a vote on the issue.

However, despite losing the argument in the House of Commons debate on the case put forward by the WASPI group, as the vote came from an ‘opposition day debate’ it is not binding.

The Government whips ordered their MP’s not to vote in the debate – repeating their stance in the controversial Universal Credit debate last month, although that did ultimately lead to concessions on the issue by ministers.

Speaking on behalf of the WASPI campaign and supporting the SNP motion to take action to restore at least part of their pension rights was Moray’s MP Douglas Ross. Mr Ross highlighted the fact that this was the first real opportunity he had to demonstrate his commitment to the Moray WASPI group, to whom he had pledged his support during the general election.

During the debate he chided SNP members who had questioned if he would keep his promises to WASPI, pointing out that the debate was the first real opportunity he had to do so. He reminded them that he had spoken with Moray WASPI and explained to them his position, which was fully accepted.

Agreeing with the motion of support for WASPI put by the SNP leader at Westminster, Ian Blackford MP, Mr Ross told the House of Commons: “I agree with a lot of what my hon. Friend says, both now and in previous debates on this issue.

“More can be done. There is a lot we can discuss and debate, and I have put myself forward to be a member of the all-party parliamentary group on state pension inequality for women. I signed a pledge before the election, and SNP Members have criticised me every day since I have been elected for not honouring that pledge.

“I return to the earlier remarks by SNP Members and by the hon. Member for East Antrim [DUP MP Sammy Wilson]. People can be convinced not by shouting them down every time but by trying to get them to go along with us.”

The Moray MP concluded: “A constituent contacted me after the last efforts by the SNP. She said, “I just wanted to say I am disappointed at the media response to your support of WASPI in Moray.

“I do hope your support for us continues and we don’t become victims in the backlash.” I believe WASPI women are already victims – victims of decisions in this Parliament by both sides – and, because they are already victims, I say in the calmest possible way to the SNP that, despite the actions of SNP Members in this debate, I believe the wording of their motion is sensible.

“If the House divides tonight, I will be joining them to support their motion.”

Mr Ross ignored the Conservative instruction not to vote and did so alongside 287 others.