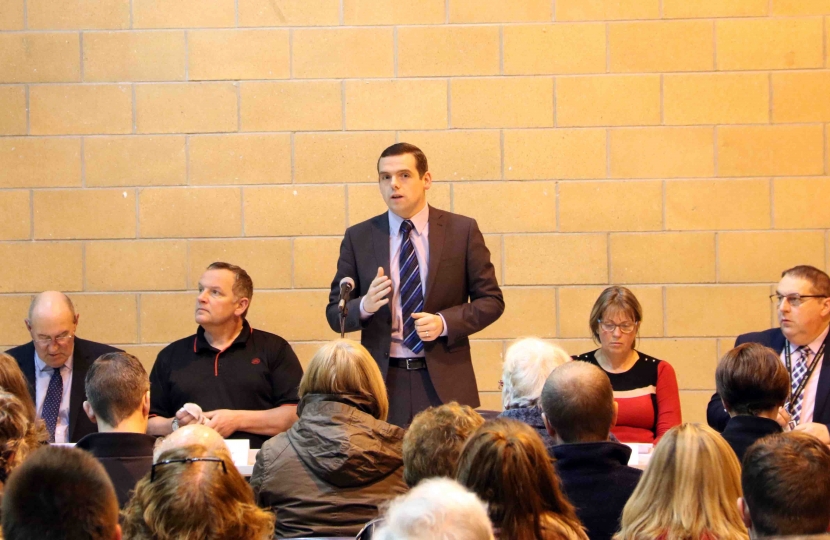 Moray MP Douglas Ross has thanked members of the community for turning out in significant numbers to the public meeting he chaired in Lossiemouth last night (Thursday) to discuss bank closures.

Douglas who is holding a similar meeting at Longmore Hall in Keith tonight (Friday) said: “I want to thank everyone who came along but I am very disappointed that the Bank of Scotland refused to send representatives to listen to the concerns of local people.

“It was clear from the meeting how much the community is frustrated and annoyed by this latest closure and by the lack of dialogue from the bank over this important issue.

“However, after I pressed them on their no-show decision, Bank of Scotland representatives have agreed to meet with me and a delegation from both Keith and Lossiemouth whose branches are being axed.

“The meeting will take place next month and will include local councillors and members of the business community.

“Although I’m glad the bank has agreed to this meeting, there is much that needs to be discussed. All national banks who have customers in Moray need to make sure that adequate facilities are in place to enable people to have a satisfactory service. Sending a mobile van for an hour a week just isn’t good enough.

“Lossie is a growing town and set to get bigger with the substantial investment at RAF Lossiemouth boosting the number of personnel and their families who will be based there.

“There is never a good time to close a bank, let alone the last one in the town, but to do so just before it expands significantly is just madness.”

Councillor James Allan who represents the Lossiemouth ward added: “This decision will make it even more difficult for visitors and local people to access cash as the Bank of Scotland is also proposing to close its ATM.

“It is ridiculous that a town the size of Lossiemouth stands to be reduced to just two ATMs as a result of this decision. As a community we need to come together and make it clear that this is totally unacceptable.”